THE SHIITAKE MUSHROOM IS ONE OF THE MOST CULTIVATED MUSHROOMS IN THE WORLD.AFTER THE LATEST IMPROVEMENTS IN THE TECHNOLOGY FOR CULTURING IT, IT BECAME THE FAVOURITE OF THE MARKETS AND THE DINNING TABLES IN THE UNITED STATES, CANADA AND EUROPE.

How to cook a shiitake?

Shiitake is one of the most popular edible mushrooms. What is this thing that makes the Shiitake so delicious? The answer to this question is its unique flavor - when cooking, Shiitake releases a mild garlic-pine scent and has a rich, earthly, so-called. "Umami" flavor. The mushroom has a pleasant and characteristic fleshy taste that gives a deeper scent to almost any dish. It is exactly what is known as the umami flavor. It can be felt in anchovies, tomatoes and other mushrooms. It is due to an amino acid in its free form, called glutamate. Do not worry - the naturally occurring glutamate in nature is not the same and has nothing to do with the artificial flavor enhancer monosodium glutamate (MSG). This artificial MSG is formed by the addition of a salt molecule and the result is a very unhealthy dietary supplement, which unfortunately occurs in almost all processed foods.  The good news is that you can use the shiitake mushrooms to add a mild or distinguished flavor to your food without using the unhealthy MSG supplement. That is why the dried Shiitake bio-mushrooms are so popular. Used as a spice, they give the desired characteristic and distinct taste without harming your health.

As for the entire mushroom, Shiitake is easy to be prepared for cooking because it is cultivated directly on a tree where there is no dirt or bugs. Most recipes say that we have to throw away the stems when we cook the mushroom because they are hard and difficult to cook, but in fact the truth is that many people love them. Their crisper structure is extremely delicious for them. Stems may take longer to prepare and not become entirely brittle, but we suppose it's just a matter of taste.

The Shiitake bio-mushroom can improve the taste of most foods. It is also delicious to eat the mushroom itself prepared in different ways. It emphasizes the taste of vegetables, meat, seafood, birds and even other mushrooms.

The classic way to prepare the dried bio mushrooms is by letting them rehydrate for 20-30 minutes in lukewarm water and so get a Shiitake broth. If added to some light cream sauce, Shiitake is ideal for flavoring paste dishes. Shiitake bio-mushrooms can be prepared like all other types of mushrooms, given that they do not contain as much water.

The most popular method of cooking is simply sautéed.

With these universal mushrooms, however, there is no limit: 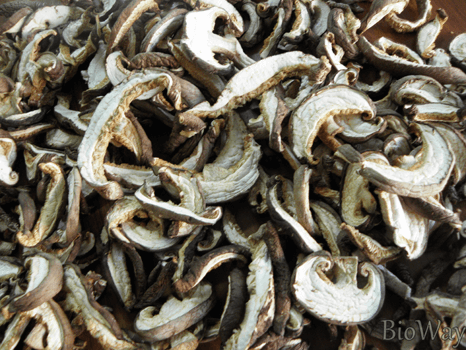 The proven benefits of taking Shiiake are: